So far, defense companies have done a credible job fielding Unmanned Underwater Vehicles (UUVs), Autonomous Underwater Vehicles (AUVs), or other water-borne robots to address critical capability requirements such as Inspection, Search and Reconnaissance (ISR) and underwater terrain mapping. There is an ongoing and continuous stream of small incremental improvements to these technologies, but there remains a large gap between what is needed and what is available. The challenges are significant. However, with the rate at which all technologies are advancing and the number of researchers, engineers, and business entities investing time and resources into the growing field of robotics, once seemingly unachievable challenges are being overcome through current optimistic and enthusiastic efforts. 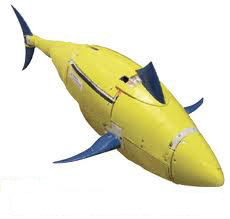 Society’s ability to imagine the possibilities for robotic systems is well known. Advanced technologies are portrayed in an increasing number of films; from technologist’s wearing a weaponized, flying exo-skeleton to soldiers avoiding robotic tuna sentries guarding an underwater fortress. From humanoid robots to spider-like robots to fish-like robotics, the dream of “what could be” is alive and robotics researchers are breaking down the old barriers to achieve many of these visions. The reality today is that unmanned systems are saving lives and proving that investment in the advancement of these systems has a high payoff.

Underwater operation presents additional challenges for researchers and developers. They share many of the same navigation, power and logistical challenges as their UGV (unmanned ground vehicles) and UAV (unmanned aerial vehicles) counterparts. However, unlike those platforms, underwater systems have additional communications and environmental condition challenges, especially when operating in the open ocean. The underwater system must have packaged electronics that are water tight at depth (versus splash-proof), use materials that are resistant to aggressive corrosion, and be able to localize underwater without the aid of conventional communications (such as GPS or WiFi). While water covers just over 70% of the earth surface, AUV technology development and purchases represents only approximately 5% of the military R&D unmanned systems spending. Part of this funding mismatch is due to the successes being realized today in ground and air-based unmanned systems within present warfighter missions, but also because the AUV developer has an increased level and number of challenges that have been difficult to overcome. Unmanned underwater technologies remain a young technology primed for a boom similar to the UAV market boom of the last twenty years. The good news is that technology advances every day, researchers are working hard to deliver useful tactically-relevant AUV technology, and it is becoming possible to overcome the challenges.Robots That Can Roam Oceans and Waterwayscurrent approach as it relates to maritime strategy is captured in the Naval Operations Concept 2010 brief published by the joint efforts of the U.S. Marine Corps (USMC), the U.S. Navy (USN), and the U.S. Coast Guard (USCG) and is worth reading for those interested in developing solutions for the oceans and waterways. Most evident is that the focus is no longer just on military might. Instead, there is increased balancing with peacetime needs and prevention of conflict, similar to the promotion of health and fitness over treatment in the health-care industry. Twentieth century style warfare — large scale nations against one another — has been replaced with much smaller asymmetric threats and humanitarian needs around the world. Due to the vast number of waterways and the number of missions that demand sea-based support, there is increasing interest in systems that can operate in water-based environments.Tackling Unique ChallengesThe challenges of achieving autonomy with unmanned systems are captured in many articles and publications. An area of focus is making these systems act more like biological systems. For instance, these systems need obstacle detection and avoidance (ODOA), situational awareness (“What is happening around me?”), decision-making capacity (“Should I respond aggressively or passively?”), and health monitoring (“Is everything OK with me?”). All systems could benefit from improvement in the efficient use of onboard energy sources. However, the AUV has an additional set of unique challenges that must be addressed.Resistance to CorrosionThe first order challenges of water-based systems is the water environment itself, especially salt water. Walk to any harbor or port and look at the ships and structures. You will notice that anything metal is either freshly painted or is showing signs of corrosion (rust). Unlike man-made structures and systems, biology has overcome the harshness of the environment, but manmade systems are limited by the resilient technologies that can be effectively adopted into AUVs. This environmental challenge drives a need to adopt a prevention and maintenance strategy for life cycle management that involves resilient or special materials selection and/or design methods to enable easy maintenance or replacement.Moving Through WaterThe GhostSwimmer™ AUV accurately mimics the swimming motions of a real fish, making it harder to detect.An AUV must have the ability in both power and agility to overcome complex hydrodynamic forces. While analogous to aerodynamic forces in many ways, hydrodynamics in unsteady, obstacle-laden environments is often more complex and not well understood. These forces change over time and can act upon the AUV over large durations of time (continuous currents) or in short bursts (gusts and turbulence). Therefore, for normal operation (not including storms and extreme weather conditions) the AUV has high demands on its power supply for normal operation and even simple station keeping.

In addition, although any autonomous system requires collision detection and avoidance capability, the AUV must contend with more challenging limitations. Swimming sea creatures seem to have the ability to detect obstacles, or prey, using a variety of sensory capabilities. However, unmanned systems can leverage only those integrable sensory capabilities developed by our tech community. Unmanned Aerial Vehicles (UAVs) have similar collision avoidance sensory needs, but the technologies for in-air sensing are much further advanced and can effectively sense objects hundreds and thousands of feet away. Usable AUV sensory capability is lagging, leaving effective sensing to less than 50 feet and many times less than 10 feet depending on the level of debris in the water. When we couple the hydrodynamic maneuverability challenges for AUVs, one can only marvel at how well fast-moving fish have developed their advanced detection and maneuvering. It also highlights how much more we need to do to advance the state of the AUV art.Communicating Under WaterWater significantly attenuates sound and many spetra of light. Therefore, the accomplishments of the technology community in wireless communications technology (WiFi, GPS, etc.) does not work in the water. This presents the AUV with a significant challenge in localization and navigation as well as transfer of information to and from other systems. Research and development focused on addressing this limitation is needed. However, until these technologies advance for underwater applications, the most effective means for overcoming the challenge includes having the ability to return quickly and often covertly to the surface where the system can leverage in-air wireless and geo-positioning technology.Oh! The PressureOperational depth presents another significant and unique challenge to AUVs. As a system travels deeper under water, the pressure increases. Unlike aerial vehicles that can operate effectively at 10 feet or 1000 feet above the surface, the hulls and pressure vessels for the AUV must be designed for the appropriate depth. This makes the vehicles more mission and depth-specific than their aerial counterparts. Therefore, some flexibility in design is removed the deeper a system is intended to travel. For instance, a sleek, lightweight, fast-moving system operating in the littoral regions of the ocean would require a structural design overhaul if it needed to operate in the deeper ocean 3000 feet below the surface. Developers of underwater systems need to make a decision on maximum depth up front, often limiting optimal system performance for one depth over another.Rising to the Future NeedsThe Naval Operations Concept 2010 highlightscapabilitiesthatwillbeneeded in underwater systems in the future. There are many leading companies involved in the quest to meet these challenges. Massachusetts is home to many AUV development companies such as Woods Hole Oceanographic Institute (WHOI), Bluefin Robotics (Battelle), and Hydroid (Kongsberg). In addition, Massachusetts is home to many prominent universities that are working to address underwater systems needs such as Massachusetts Institute of Technology (MIT) and Olin College. Advancements are being made to address evolving underwater systems needs. However, what is needed is a paradigm shift in sophistication and capability.In the interest of addressing the challenges of underwater vehicles and the ever-increasing mission capability needs of military and commercial entities, Boston Engineering and the Intelligent Vehicles Lab at the Franklin W. Olin College of Engineering have been working as a team for over two years to take a large step in AUV advancement. Through funding from the Office of Naval Research (ONR) and a large internal R&D effort by both Boston Engineering and Olin College,a new generation of AUV is emerging. The approach works to make significant strides in capability based on biomimetics. We are generating a new “species” of underwater systems that move efficiently and responsively in the water the way fish do. By leveraging past research, the latest electro-mechanical technologies, and rapid prototyping techniques, the team developed an AUV that could swim autonomously in 6 months. And, through additional Phase II development funding from ONR, the team expects to showcase its next generation AUV in 2011, which is intended to demonstrate advancements in efficiency and maneuverability while addressing the main challenges of underwater vehicle power, communications, autonomy, and more.While there have been many attempts to duplicate the swimming actions of a fish, a breakthrough achieved by the Boston Engineering research team has been in producing these movements efficiently. One of the primary claims is in the electromechanical design that allows efficient fish-like swimming motion. After proving that fish-like oscillating foil propulsion could indeed have higher propulsive efficiency and could be achieved by manmade methods, the team focused on eliminating drivetrain losses. This new type of efficient propulsion and biological mimicry could be a paradigm shift in underwater AUV capability and usefulness.The trend of modeling biology in engineering is certainly not new, but it appears to be gaining in popularity. Much of the work done in the past was limited by what enabling technologies were available at the time. However, between then and now, there have been significant advancements in low-power high-throughput computing, material science, and general biomimetic modeling. As companies and academia make progress in demonstrating how effective biomimetic designs can be, the more they will be able to rise to the technical challenges presented by current adopters of unmanned technology, especially those concerned with operation in oceans and waterways.This article was written by Mark Smithers, Vice President and CTO, Boston Engineering Corporation, Waltham, MA. For more information, visit http://info.hotims.com/34451-520.

Top Stories of the Months